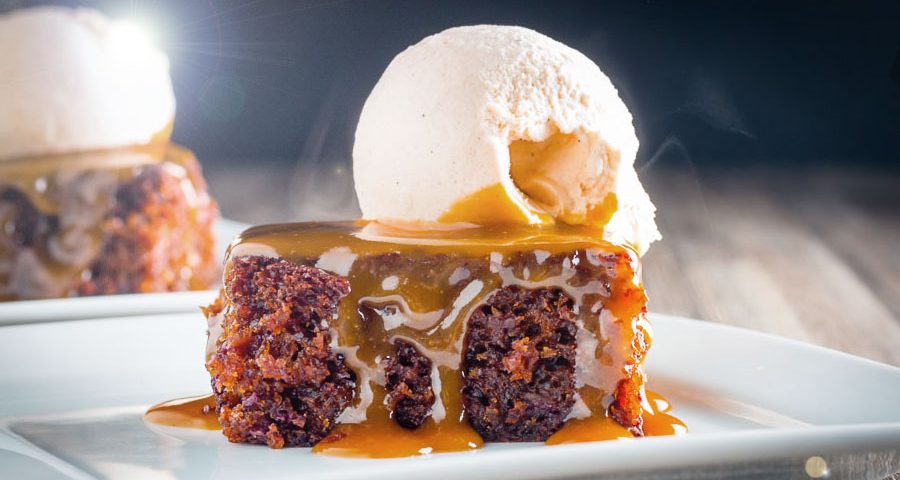 Gosh, we’ve been so focused on our savory menu items over the past few months! Guess it’s time to sweeten things up a bit. Behold the sticky toffee pudding, a sticky, spongy, sugary sensation that will make you go, “Wow, why don’t I have more of this in my life?”

As is common in the Commonwealth, the sticky toffee pudding isn’t the creamy, liquid-y dessert we’re accustomed to in North America. Rather, it is a sponge cake consisting of chopped dates and toffee sauce. It’s also typically paired with vanilla ice cream or custard because it complements the dish so nicely. Trust us, you won’t want to go without it.

Compared to the more historical Yorkshire or Bread puddings, the sticky toffee pudding is still in its school trousers. It was only invented in the 1940s, which is kind of a shame, because it probably would’ve made a lot of people happy through the ages.

Anyway, the exact origins of the recipe are kinda vague. However, we can generally trace it back to two Canadian air force officers and a British hotel manager. During the Second World War, the officers lodged at a hotel in Lancashire. While there, the chaps gave the recipe to the hotel manager, a woman named Patricia Martin. That’s right, this yummy pudding was created by Canadians!